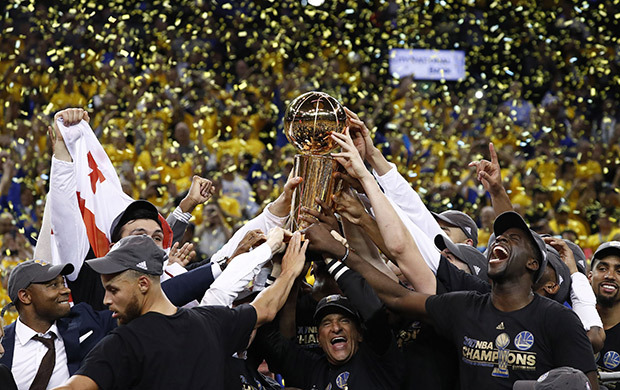 The Cleveland Cavaliers fall to Golden State in game five of the NBA playoffs, losing 120-129. The Cavaliers avoided the humiliation of a sweep, winning game four with series ending 4-1. Last year in the Finals when these two teams met, Golden State came out strong and took a 3-1 lead. However, Cleveland was able to rally back, and win the series bringing the first championship to Cleveland in 51 years. Unfortunately, Cleveland was not able to repeat the same miracle last night. The Warriors proved to be unstoppable with their newest addition, Kevin Durant.

Durant finished the night with 39 points, seven rebounds and five assists. Steph Curry was also a big contributor to the success of the Warriors and finished with 34 points and 10 assists. LeBron James led the scorers table with 41 points, 13 rebounds and 8 assists, but proved it wasn’t enough to stop the Warriors. This was the third year in a row that the Cavaliers and the Warriors have played in the NBA finals. With an ever growing rivalry between the two cities, it only adds to the stress of winning. We’ll just have to wait and see if these two teams will meet again, and the question begs if the Warriors will remain on top or will the King reclaim his thrown?